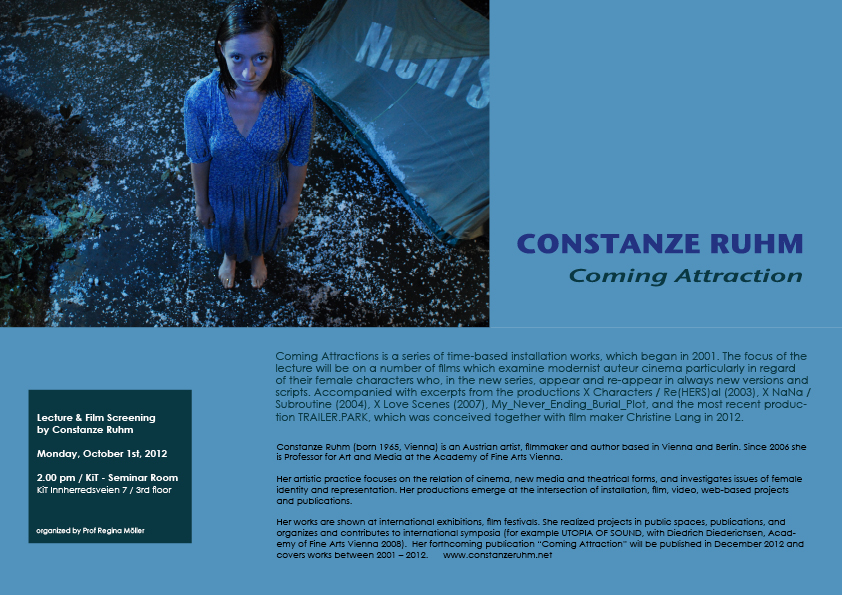 Coming Attractions is a series of time-based installation works, which began in 2001. The focus of the lecture will be on a number of films which examine modernist auteur cinema particularly in regard of their female characters who, in the new series, appear and re-appear in always new versions and scripts. Accompanied with excerpts from the productions X Characters / Re(HERS)al (2003), X NaNa / Subroutine (2004), X Love Scenes (2007), My_Never_Ending_Burial_Plot, and the most recent production TRAILER.PARK, which was conceived together with film maker Christine Lang in 2012.

About Constanze Ruhm:
Constanze Ruhm (born 1965, Vienna) is an Austrian artist, filmmaker and author based in Vienna and Berlin. Since 2006 she is Professor for Art and Media at the Academy of Fine Arts Vienna.

Her artistic practice focuses on the relation of cinema, new media and theatrical forms, and investigates issues of female identity and representation. Her productions emerge at the intersection of installation, film, video, web-based projects and publications.

Her works are shown at international exhibitions, film festivals. She realized projects in public spaces, publications, and organizes and contributes to international symposia (for example UTOPIA OF SOUND, with Diedrich Diederichsen, Academy of Fine Arts Vienna 2008). Her forthcoming publication “Coming Attraction” will be published in December 2012 and covers works between 2001 – 2012. www.constanzeruhm.net