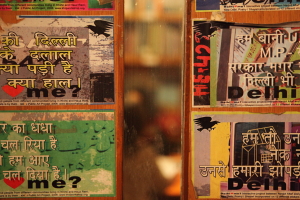 Until very recent the cliche image of "India" in the European mainstream media was that of a developing country. Today, the discourses of a raising super power, postcolonial dependencies, ecological crisis, migration movements, nationalism and fundamentalism shape a new view of India.

SAVE AS... INDIA is a week-long project that presents documentary practices across different artistic disciplines: painting, performance and video art. In the framework of the "India week" at NTNU from October 1 to 9, 2011 it introduces contemporary art projects from and about India that investigate audiovisual archives, urban development, conditions of labor.

The goal is to learn something about how to look at and engage with a multitude of complex realities without reducing them to patterns of perception that follow a set of pre-fabricated expectations.

Opening SAVE AS... INDIA

SAVE AS... INDIA is a series of workshops, projects, video installations and conferences that will be initiated in the art academy KIT from October 2-7, 2011. Shaina Anand, Ashok Sukumaran, Praneet Soi are among the participating artists of a project that is situated at the crossroads of artistic research, urban development and new media.

SAVE AS... INDIA is supposed to launch a long-term collaboration between KIT and Indian institutions, such as the new media initiative "Sarai" in Delhi, the "Camp" platform, Mumbai, or "Calcutta Art Research Foundation (CARF)".

"Call Cutta in a box" Presentation by Joerg Karrenbauer

"Call Cutta in a box" is an intercontinental phone play developed by "Rimini Protokoll" and will be on show in Teaterhuset Avant Garden from October 1-8, 2011.

Rimini Protokoll is the label of three theatre makers (Helgard Haug, Stefan Kaegi, Daniel Wetzel) who got to know each other as students of applied theatre science in Giessen/Germany. Since 2000 they have created a series of important stage productions as well as site-specific works in a variety of configurations. Rimini Protokoll is recognized as being among the leaders and creators of the theatre movement known as "reality trend" or documentary theatre, which has exerted a powerful influence on the theatre scene not only in Europe. Amongst others they were awarded the "Europe Prize New Theatrical Realities" in 2008 and in 2009 Stefan Kaegi received the "European Routes Award for Cultural Diversity" for his site-specific project "Cargo Sofia-X", in which the audience is placed in the back of a truck and followes the traces of two Bulgarian truck drivers.

For "Call Cutta in a box" Kaegi joined forces with Jörg Karrenbauer who collaborates with Rimini Protokoll since 2002. For three years Karrenbauer toured the project in more than 30 cities in Europe and the Middle East before he brought the truck to Asia and developed new versions for festivals in Tokyo, Singapore and the Expo in Shanghai. For NTNU's festival "INDIA 2011" he sets up "Call Cutta in a box" in Trondheim.

Praneet Soi is currently participating in the first Indian National Pavilion at the 54th International Art Exhibition - La Biennale di Venezia, opening on 1st of June 2011. The Indian Pavilion, located in the Arsenale, features four artists and is curated by Ranjit Hoskote. Soi’s work for this pavilion involves a large-scale mural accompanied by a slide installation, Kumartuli Printer, Notes on Labor and a work-station. Read more

The goal of this workshop is to discuss and develop methodologies of a joint project between Trondheim and Calcutta that looks into a particular geography and maps out its economy, both social and material.

In a series of practical exercises Praneet Soi will introduce strategies of mapping and contextualizing, by critically exploring a space and its architecture, a process and its fragmentations, an environment and its defamiliarization.

What is the impact of research, data generation and data collection, within a multi-disciplinary artistic process, whether it is based on text, drawing, video, sound or still image?

CAMP is an organisation formed in Mumbai, India, in 2007. Its artistic projects engage with “infrastructures” as diverse as CCTV, radio, cable television, cycle rickshaws, electricity and sea trade. Their work combines a long-term interest in the mediations produced by such technologies with the production of open-access archives, and artworks themselves nestled in these contexts.

The art of archiving

PAD.MA is a way of opening up a set of images, intentions and effects present in video footage, resources that conventions of video- making, editing and spectatorship have tended to suppress, or leave behind. This expanded treatment then points to other, political potentials for such material, and leads us into lesser-known territory for video itself... beyond the finite documentary film or the online video clip.Read more

"Call Cutta in a box": Presentation by Joerg Karrenbauer ›